I'm pretty young. The Web I grew up with was the web of the mid-to-late 2000s and early 2010s. Web2 was already alive and kicking, Youtube, Twitter, and Facebook were all around with massive userbases, and social media was slowly rising.

Youtube didn't have two ads in a row at the start and end of every video. Nobody was tracking you across sites, generating massive amounts of surveilled user data to sell targeted ads. The Internet wasn't, like, six websites, and you didn't have to go by your real name everywhere. The Web was still around; you could still find forums and moderated discourse built around communities, run by webmasters with genuine passion for the sites they maintained.

Not anymore. Massive tech monopolies have consolidated and corporatized the Web and made consumers out of users, reshaping discourse into the form that best facilitates corporate profit, not robust human connection. For example, a tweet just isn't long enough to make thoughtful statements, and tweet threads are extremely easy to take out of context. Social media websites are effectively unmoderated, and it's basically impossible to have a discussion on them without risking being brigaded by fascists, racists, TERFs, and other bastards who would get banned in an instant in a moderated space. Not to mention, they're inundated with ads that are disguised to look like regular posts, all targeted with mass data surveillance just to squeeze one more dollar out of you.

This corporate design has infected the Web, changing how we move through the space of it. Even creators - artists, musicians, writers - have been browbeaten into creating in ways that return profit to the corporations, while chasing fleeting, ephemeral clout in the form of likes and retweets. But I've done the content creator dance. And it is exhausting. Wannabe creators are forcibly turned into wannabe entrepeneurs and ~influencers~, selling not just what they create but their very selves, trying to market personality and humanity like a fucking commodity. And I'm guilty of this, too! Even though I know that Twitch is exploiting streamers with promises of stardom while reaping half of any profits they manage to make and giving them peanuts for ad revenue; even though I know that Youtube only cares about the algorithm and keeping clicks on the site, burying and demonetizing any video that isn't palatable to advertising companies; I still try to "make it" on these goddamn hellsites. If I didn't, I wouldn't have all those links on the homepage. And, I get it, part of that's just creating under capitalism. But that's because Web2 is a beast of capitalism's making. It was created in capitalism's image, and as long as capitalism exists, it will uphold the corporate Internet; or worse, it'll try to foist Web3 on us.

And no, Web3 will NOT save us. It's based on artificial scarcity and is even more capitalist than Web2, just right-libertarian-flavour capitalism, with even fewer regulations, even more scams, and even worse environmental outcomes. The blockchain recreates a problem that predates the Web, NFTs are a pump-and-dump scheme, cryptocurrency is a Ponzi scheme, and the whole thing is predicated on electricity waste futures that demand more and more electricity be wasted to keep the price up. That's not a solution, that's doubling down.

So how do we fix this? The obvious solution is to get rid of capitalism, but that's like saying the solution to a leaky faucet is to build a new house. Given that we live in capitalism, what can we do to reclaim our creativity and passion? For a long time, I didn't think we could fix it. I'd accepted that social media was here to stay, and that the best I could do was make a Carrd, use the limited amount of customization most social media provides, and stick to AO3 and Discord for my non-algorithmic Web interactions. But when link.tree announced their NFT integration, and I found out that Carrd and beacons.ai were also bending over backwards to support Web3, just like every other Silicon Valley capitalist eager to make a quick buck off a rug-pull Ponzi, I started digging, and what I found was Yesterweb and the Web0 project.

One of the big "perks" of Web3 is that it claims to be decentralized, but its model of decentralization is incredibly stupid, and is more aligned with neoliberal laissez-faire deregulation than actual decentralization. So Web0 asks...

"What if we just decentralized the Web?"

What if we brought back the Old Web, with personal websites, moderated forums and chatrooms, and webmasters coding sites with good old-fashioned HTML and CSS? Anyone can host their own site, so there's no big monopolistic corporation sitting in the center tracking everyone's data, and everyone can make their site look and feel however they want; HTML and CSS are far more powerful than the measly offerings of link-in-bio services like Carrd or link.tree. And hey, if people want to keep the corporate Internet, it'll still be there.

But it doesn't have to be like this. We can break our Tweets and write webpages. We can break our parasocial followings and create real communities. We can break influencer culture, break corporate surveillance, and break Web2, Web3, and all the other bullshit that's poisoned the Web and alienated us from our humanity.

A better Web is possible.
All we have to do is make it. 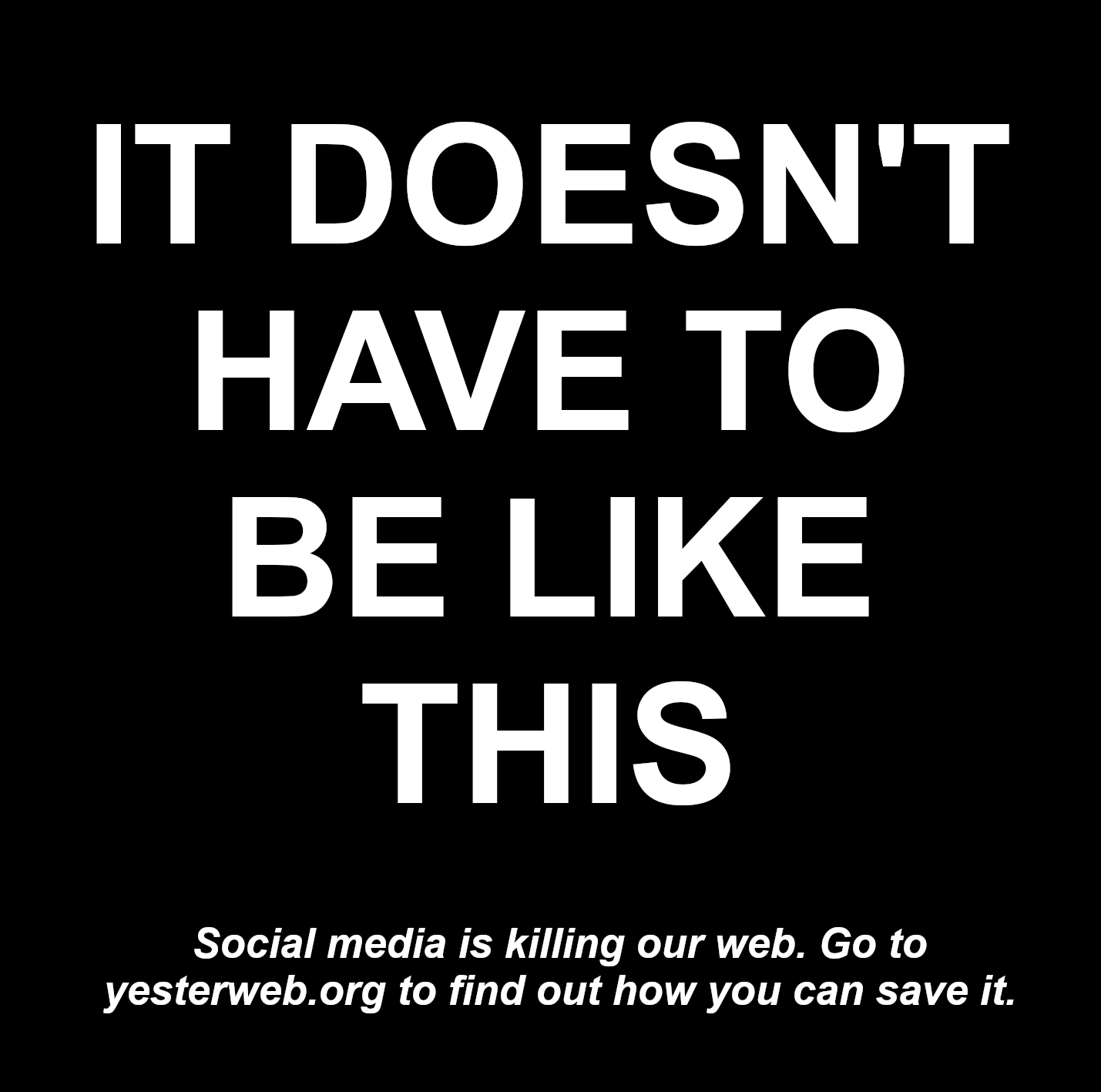